It’s my birthday, I’ll make 4 cakes if I want to

Ok, it was my birthday last month. And then 7 days later, it was my husband’s birthday. To celebrate, we threw a party so that I could bake a cake (or four).

My selections for the evening:

Changes to the recipes:

This year I made the chocolate stout cake with a spiced porter instead of stout. It was in the kegerator after all. I always use store bought chocolate frosting on this cake.

Chai spice cupcakes were delicious and well worth the effort. I made a simple powdered sugar / milk glaze and reused the chai tea bags in the milk to give the glaze a bit of flavor.

This time, I made my honey apple oatmeal cake with store bought applesauce. It’s way better when you make your own applesauce. Or maybe I over cooked it. It was just a bit less moist than usual.

When I had the cinnamon coffee cake made by a friend, it was amazing and I couldn’t stop eating it. Got the recipe and of course didn’t get the same results my first try. The instructions talk about using firm butter in the topping, but really I think you are supposed to melt the butter first. I will have to try again. 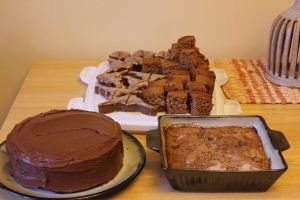 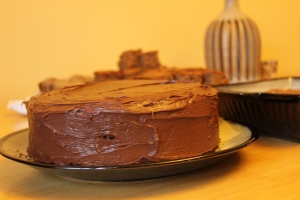 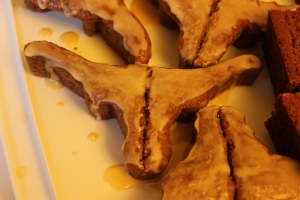 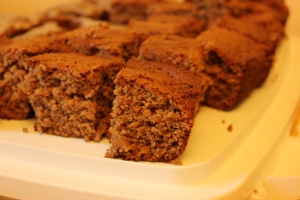 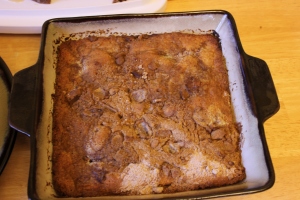 Cinnamon coffee cake... the cinnamon topping is supposed to sink into the cake.

One thought on “It’s my birthday, I’ll make 4 cakes if I want to”