Well, the big day finally arrived! Last Friday we packed up all my bike stuff, and our dog, into our car and drove straight north on I-35 until we hit Norman, OK (just south of Oklahoma City). Thanks to almost 40 donors and a generous matching donation from my employer, I raised $2,900 for the MS Society! And, it’s not too late to donate if you’re interested. I really can’t thank everyone enough, many who have donated each of the 9 years that I’ve fundraising for the MS Society.

During our drive, we stopped in Fort Worth for lunch with a friend and then in Norman to see a cousin’s new baby. The weather forecast for Sunday was showing a strong chance of thunderstorms, so the ride organizer made the decision Friday afternoon to proactively cancel Sunday for safety reasons. It was quite disappointing, even more so when it didn’t rain at all on Sunday on the route. At least we got rained on during the drive back to Austin.

I rode 100.5 miles on Saturday, the first 70 miles were mostly north, so the strong wind out of the south was incredibly helpful. The 100 mile route went very close to the finish line in Guthrie, and then out northwest to a small town called Crescent. The portion of the ride that went out to Crescent and back was quite difficult… so crossing the finish line was quite the relief.

And now, for the barrage of photos:

A view of the start – including the crazy blue bike thing…

Riding through the Oklahoma University campus 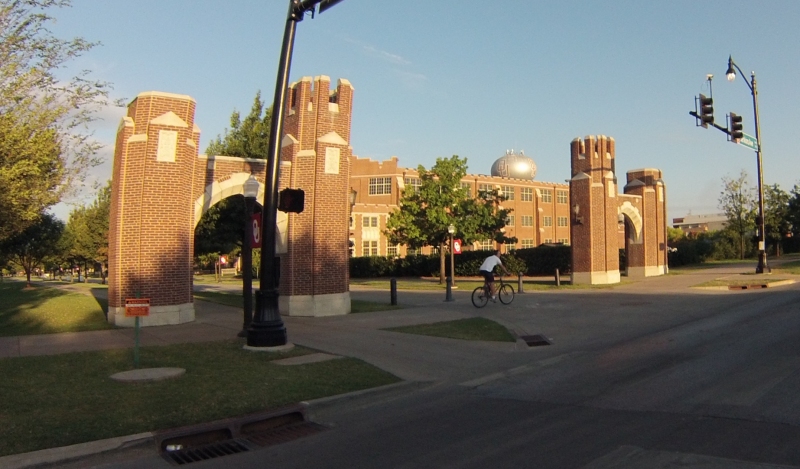 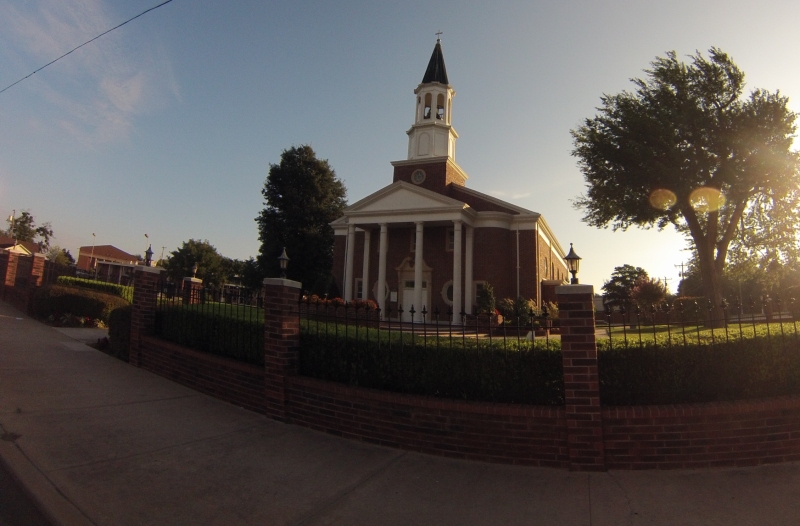 Sun rising over the cemetery 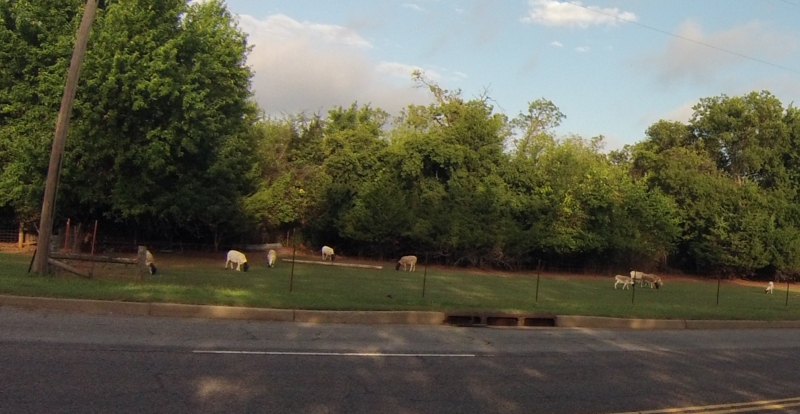 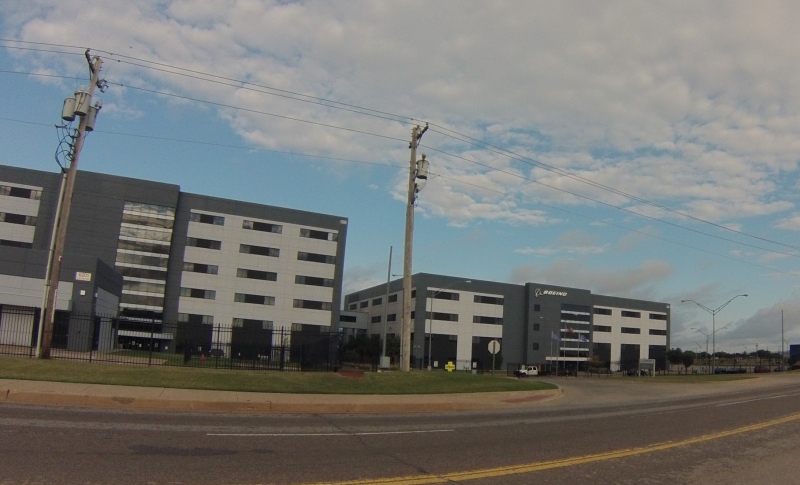 We rode next to Tinker Air Force base, which was surrounded by defense contractors like Boeing, Lockheed, and Northrop Grumman

One of the entrances to the Air Force Base 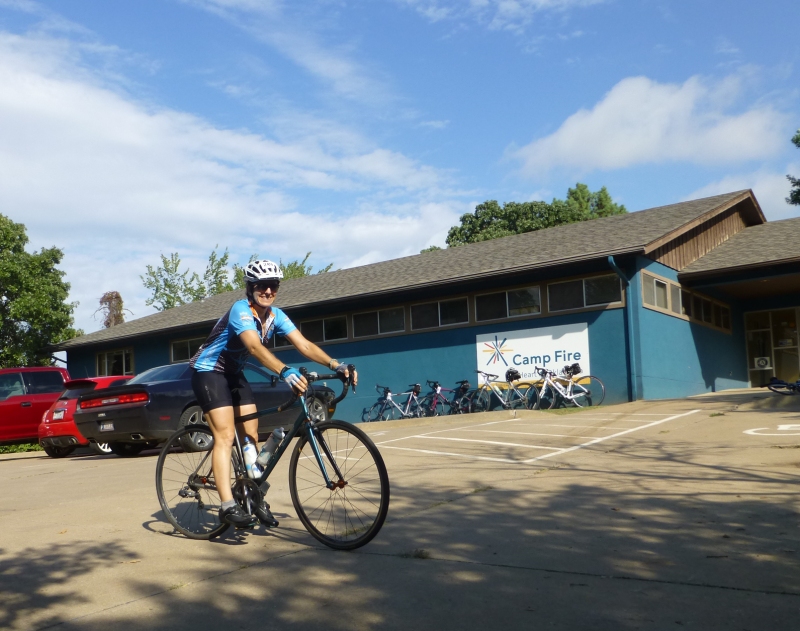 The rest stop was at a camp building

There were inspirational signs placed along the route 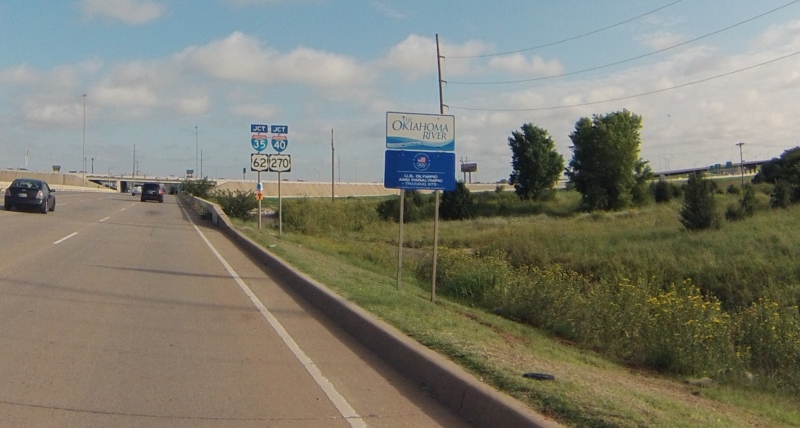 About to cross highways and the Oklahoma River, which is a US Olympics training area 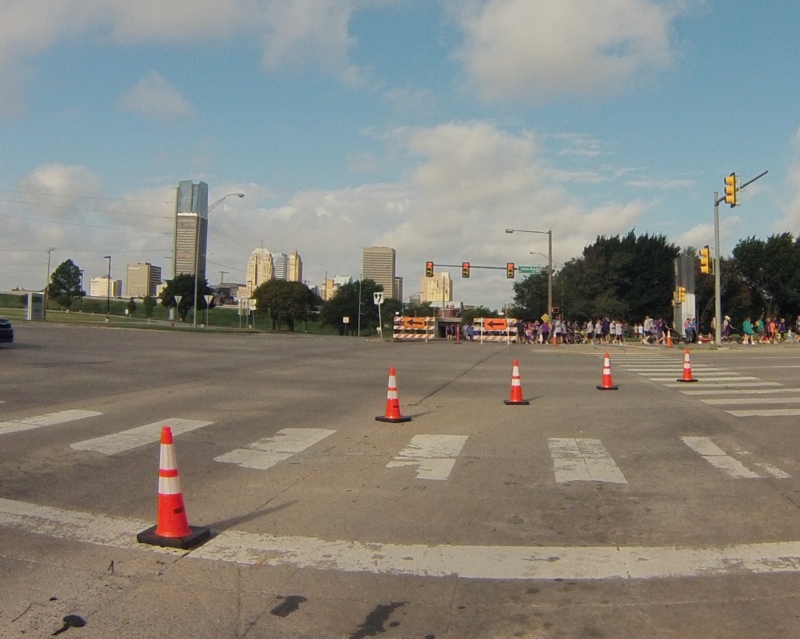 People marching for an unknown (to me) cause, wearing purple shirts 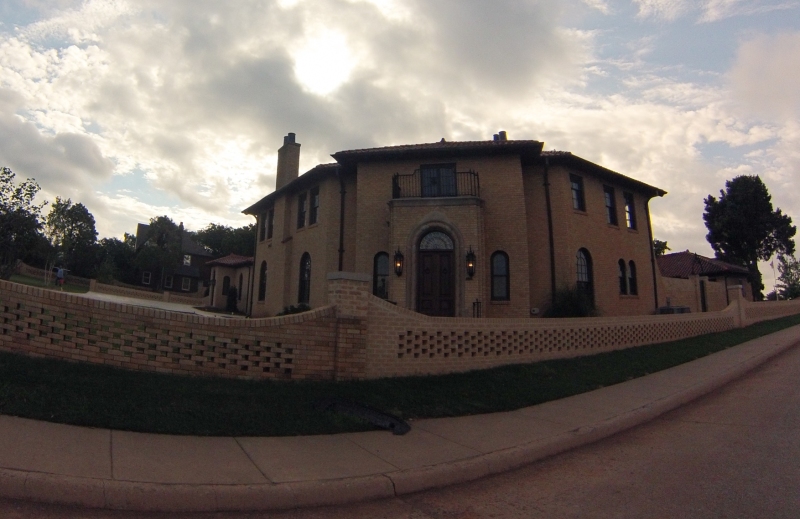 Better view of the oil derrick

I saw SO MANY CHURCHES. It put Austin’s church density to shame. In one stretch of road about a mile long, I passed 7 churches!

A little amusement park, gearing up for Halloween – you can sort of see the giant spider on the side of the roller coaster 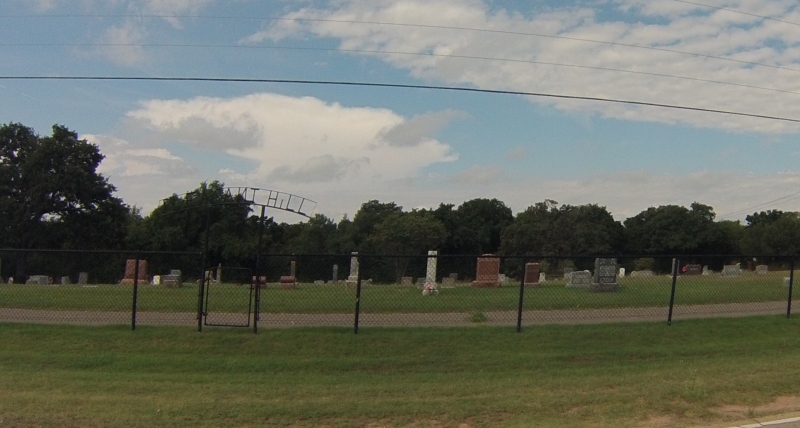 Old stone house out in the country 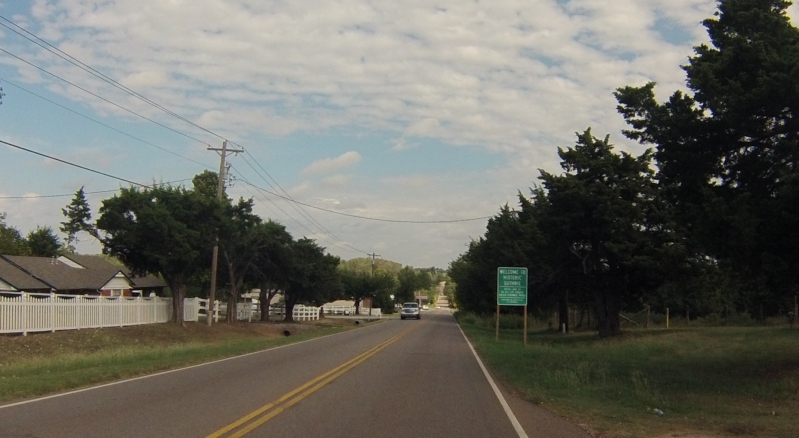 Second rest stop at mile 70 – just on the outskirts of Guthrie, and right before I started the hardest part of my ride. I was the first rider to hit this rest stop!

From the rest stop in Guthrie I headed northwest, first crossing the Cimarron river which reminded me of the color of cinnamon

Looking the other direction

A haunted house on the outskirts of town

The dirt out here was really red

Lots of inspirational signs on the 100 mile route

Out towards Crescent, the clouds were really ominous

But luckily the storm stayed to the west

I basically alternated between riding straight north and then straight west 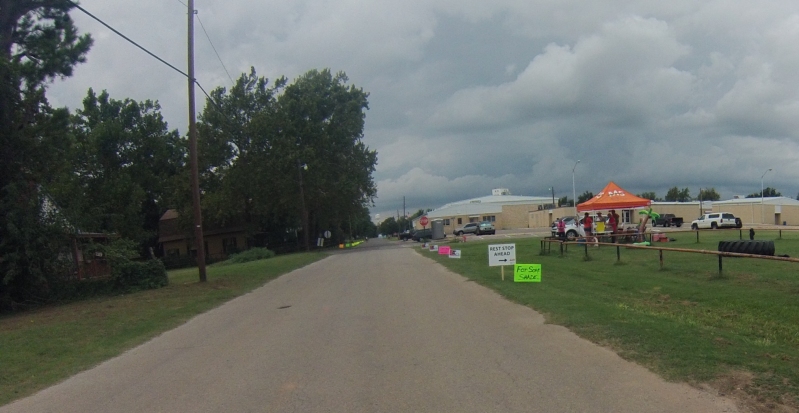 They had lined the road with signs

Crescent is not very big… 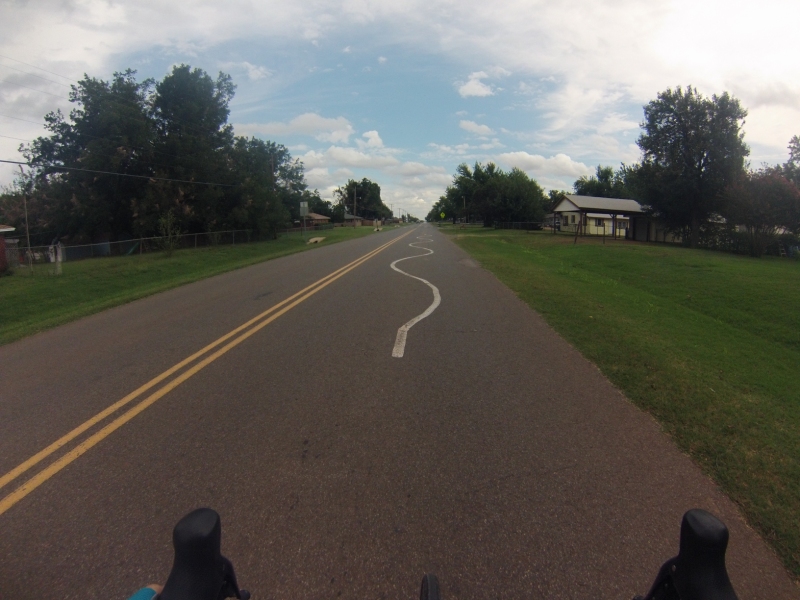 I came across these squiggly lines painted on the road from time to time, but have no idea what they mean

Where’s a good tailwind when you need it? Especially appropriate at this point since I was riding against a pretty heavy headwind for the last 15 miles.

Including this bike shop which had a penny farthing out front!

Getting so close to the finish!

The finish line finally in sight 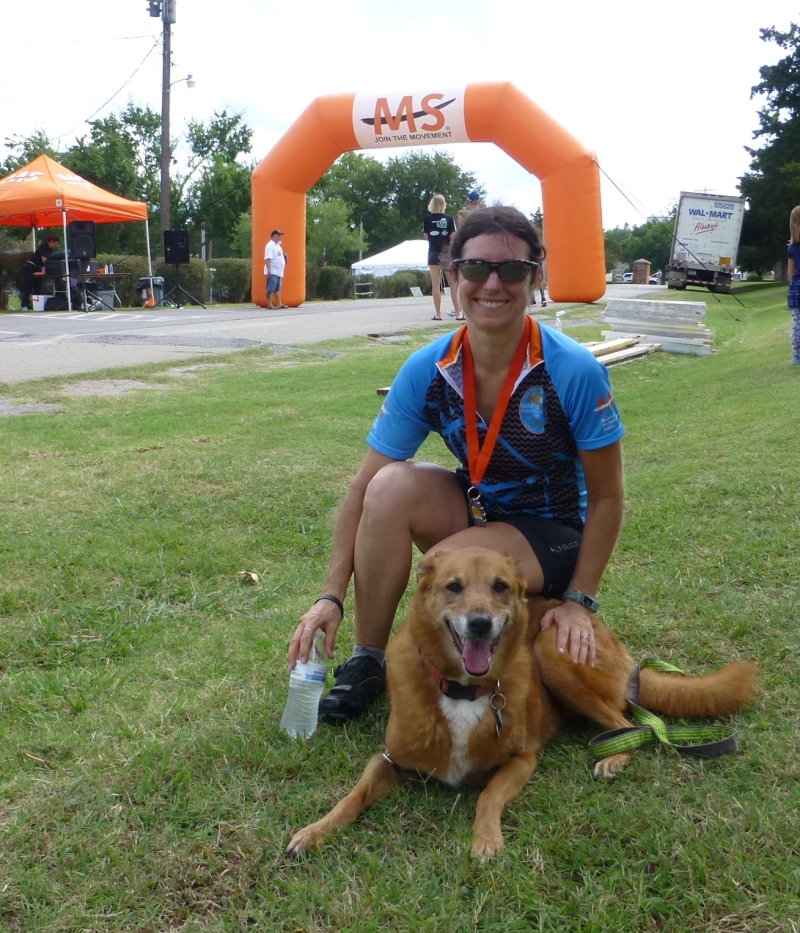 Posing with my favorite dog

I’m getting close to my fundraising goal for Bike MS: The Road Divided! Can you help me meet my goal?

This is my 9th year riding in a Bike MS event and next weekend I’ll be riding 160 miles over two days at Bike MS: The Road Divided in Oklahoma. I fundraise because I believe that MS can be cured in my lifetime and I’ve known too many people affected by this disease.

For my last big training ride, I headed south to San Marcos so that we could visit the new location of Middleton Brewing. The weather was much hotter than my last few long rides, with high humidity. Hopefully next weekend in Oklahoma is much more pleasant! Saturday’s route totaled 86 miles and had a few detours, but was overall a nice ride.

In order to get to San Marcos at a reasonable time, I left home at 7 am, just as the sun was coming up and the full moon was going down.

This cemetery confuses me – it’s incredibly overgrown, but next to a well-tended cemetery. Both are within Austin city limits!

My shadow, Lady Bird Lake, and the Austin skyline

Church on the outskirts of Austin, and it’s accompanying cemetery

There was an event at the Circuit of Americas and I was passed by many fancy cars when riding by the track, including 3 Corvettes in a row 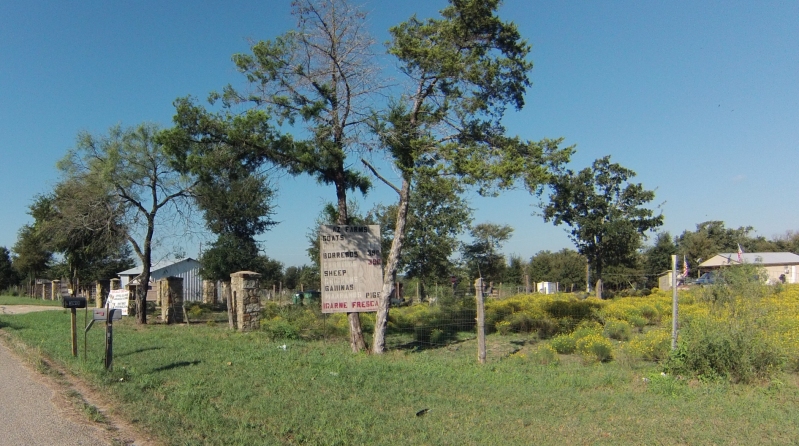 A little farm with handmade signs listing the price for goats, sheep, chickens…

Lots of little purple wildflowers along the side of the road 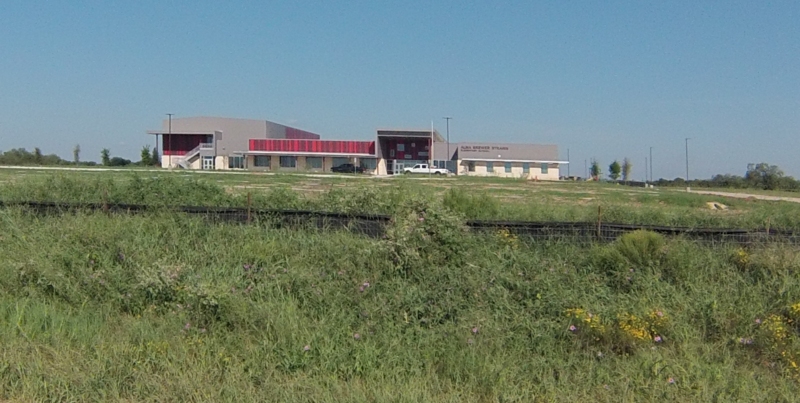 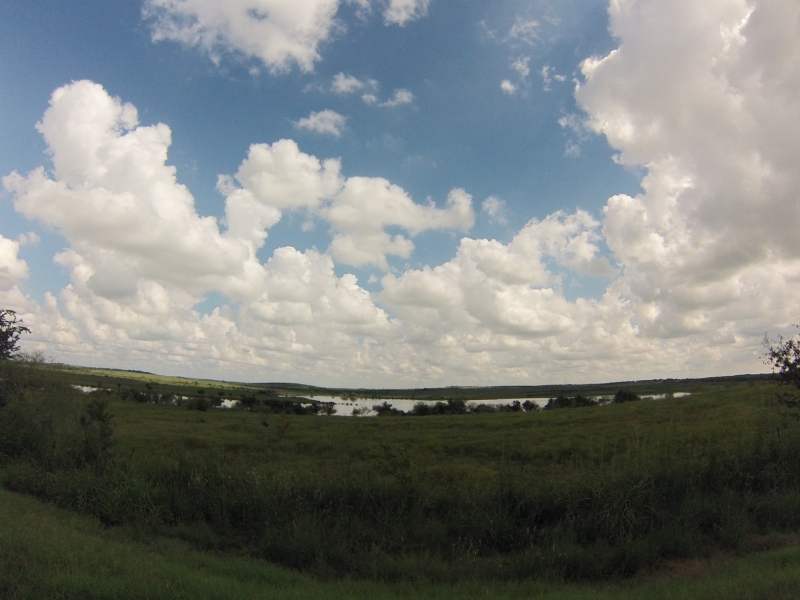 Small pond and lots of clouds 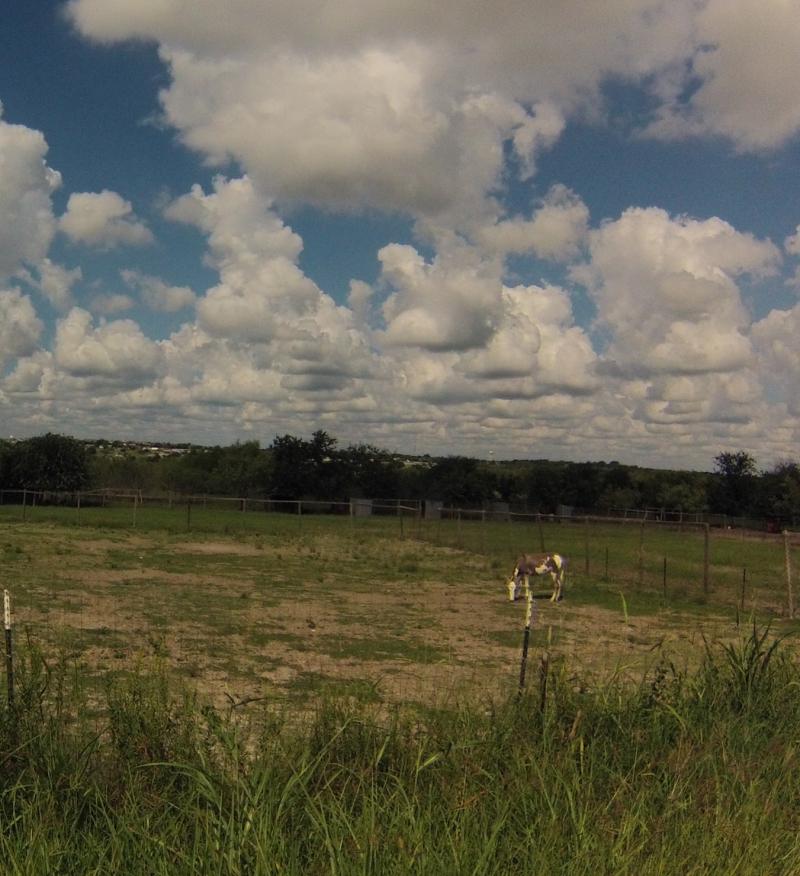 For some reason I saw many donkeys on this ride. This the best donkey photo.

Another railroad bridge, with a low water crossing and big stone supports

A sign for El Camino Real, a historic trail.

After meeting my husband, we found a food truck lot, had a delicious lust at Wanderlust and then visited Middleton Brewing for a tasting and to pick up a bottle of their latest release.

Bike MS Training Sept 10 & 11: Riding out to the breweries

ONLY ONE MORE TRAINING WEEKEND LEFT! This is my 9th year riding in a Bike MS event and in just over a week and a half I’ll be riding 160 miles over two days at Bike MS: The Road Divided in Oklahoma. I fundraise because I believe that MS can be cured in my lifetime and I’ve known too many people affected by this disease. Will you join me in the fight against MS? I’m almost 50% to my fundraising goal and I would be honored by your support!

This past weekend I got to do another destination ride, where I left from my house and ended up at a place that serves alcohol. This time, I rode 80 miles to Jester King brewery and Last Stand brewing on Saturday where my husband met me with lunch. Jester King had a beer release we wanted to try, and Last Stand was hosting an Oktoberfest party. On Sunday, I rode 42 miles closer to home.

Saturday’s ride started off pretty cool for Texas in early September. As I rode north the clouds became pretty ominous. And then it started to get really windy. Next, it started raining big stinging rain drops, that might have been small pieces of hail. I had to pull over and seek cover next to a large stone sign for a few minutes until it slowed down enough to ride again. 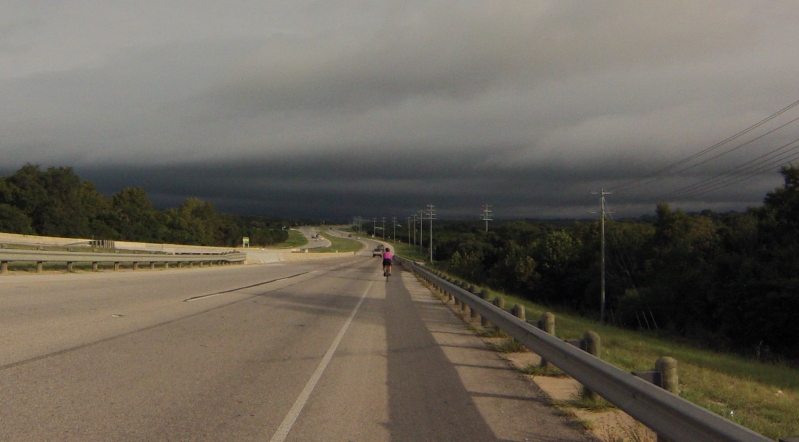 Can you see the rainbow? It’s pretty light. 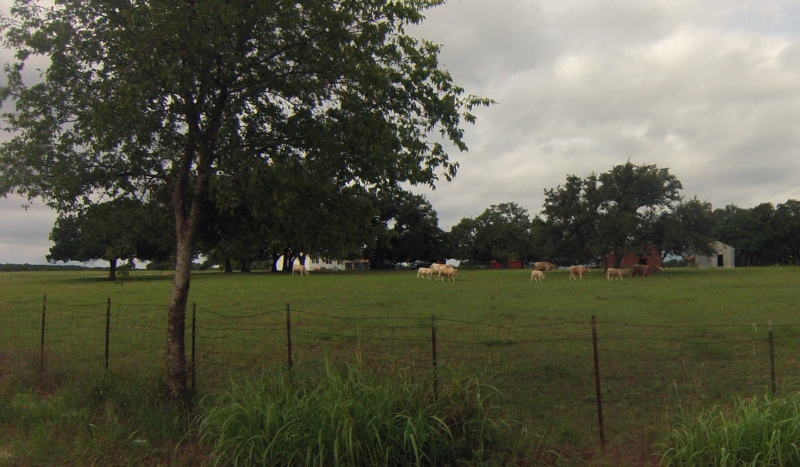 Cows walking through a field 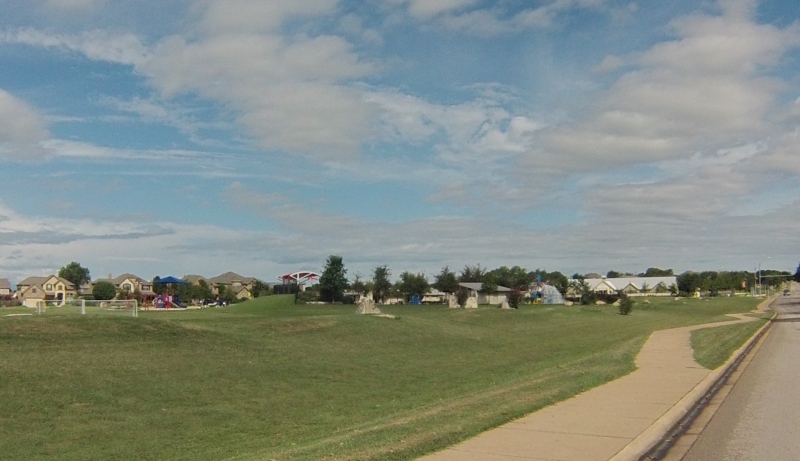 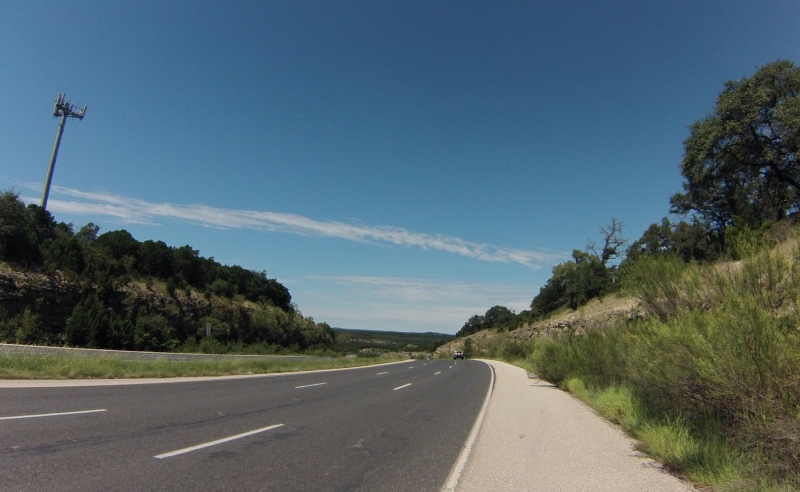 BBQ ahead, in the little trailer you can hardly see by the red building

After arriving Jester King, I got to enjoy the newest release of La Vie en Rose. It was quite good.

On Sunday I rode some very familiar roads and therefore didn’t end up with many photos.

You can kinda see the light purple wildflowers along the roadside

We attended a wedding along the North Shore of Lake Superior in Minnesota over Labor Day weekend. And I do mean north – we flew to Minneapolis and then drove straight north through Duluth to Lutsen along the shore of the lake. We had mostly lovely weather on our trip and my father-in-law ferried my old bike up from Iowa so that I could ride it in Minnesota. I know, he’s pretty awesome.

The wedding started fairly early on Saturday, so I had to get out early to get ready in time. There’s really only one paved road to put in significant mileage along the North Shore. I chose to go north because the traffic was lighter and road shoulder was nice. I rode just over 60 miles  (Canada wasn’t that much further north!) and got some lovely photos.

On Sunday, my husband and I rode south along the Gitchi Gami trail down to Temperance River State Park, did a bit of hiking, had lunch, and rode back up to Lutsen for a total of 23 miles.

This is my 9th year riding in a Bike MS event and I’ve raised over $15K during the last 8 years for the National MS Society, thanks to many generous friends and family. I fundraise because I believe that MS can be cured in my lifetime and I’ve known too many people affected by this disease. Will you join me in the fight against MS? The big ride is just two weeks away in Oklahoma!

These two buildings, plus just a few more, make up the entirety of Lutsen 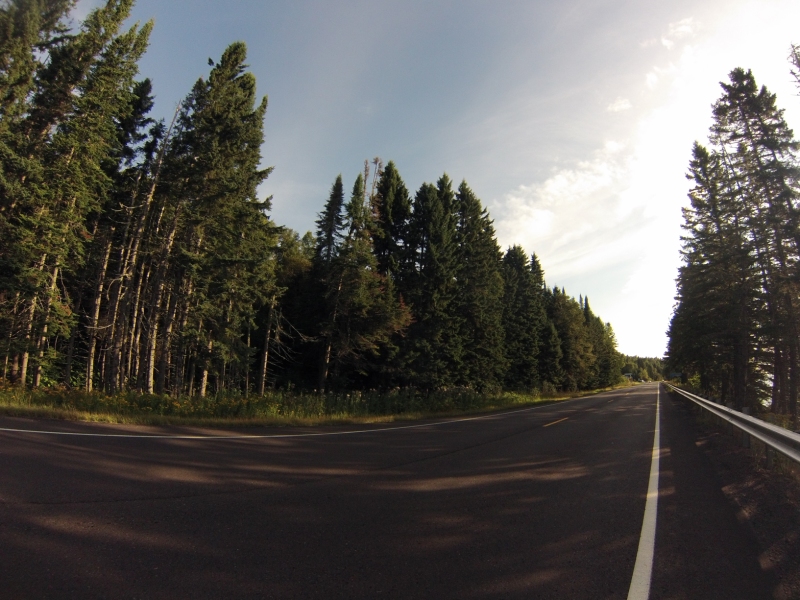 A glimpse of Lake Superior 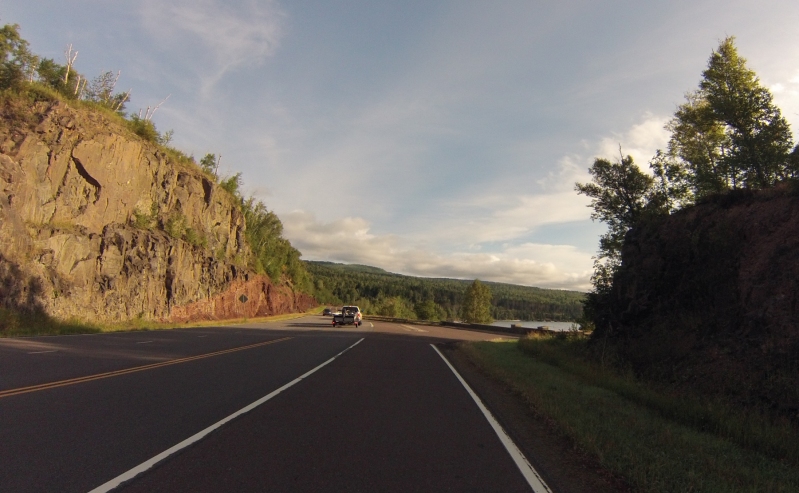 Going down over a ridge 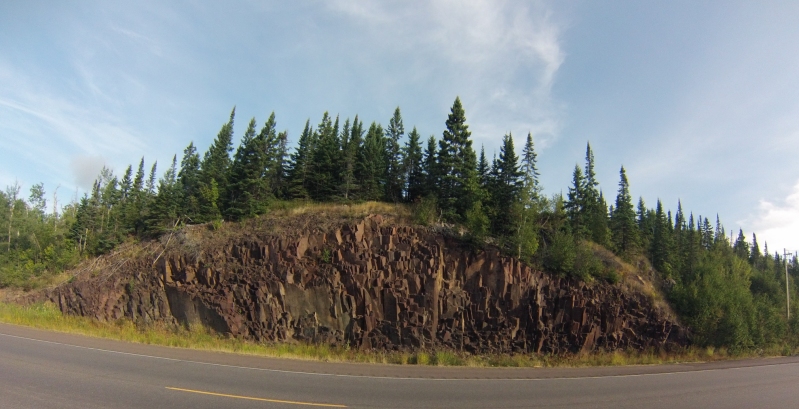 Entering Grand Marais – you can just barely see the lake

Beginning of the shopping area 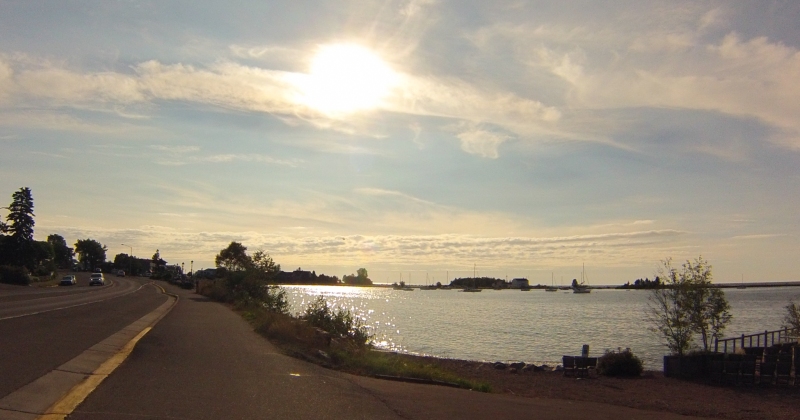 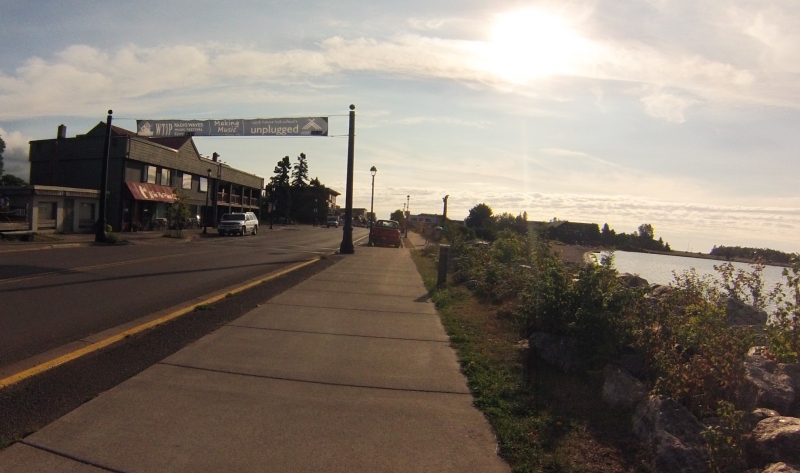 Riding along the harbor 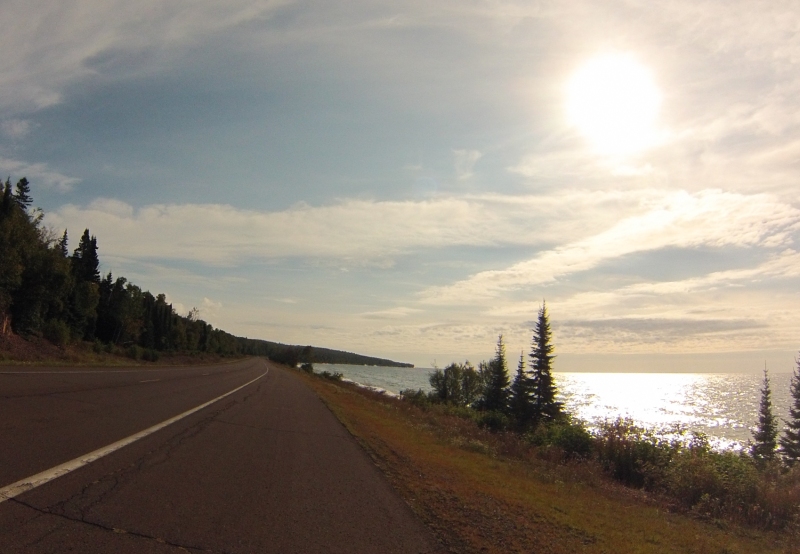 On the north side of Grand Marais

Crazy sculptures and rock piles in front of this house

View of the lake 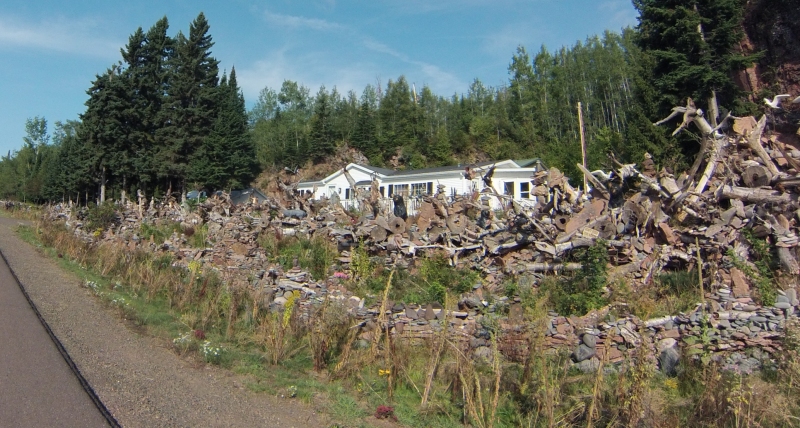 Close up of the rock piles

Some small purple and yellow wildflowers

Enjoying the wedding later that day: