Guess what! We finally did it – had the rest of our downstairs popcorn ceilings removed! In the aftermath, we also painted the entryway and the living room to match the sitting and dining rooms, and replaced the hideous kitchen ceiling light. We paid a contractor to remove the popcorn ceiling texture, reapply a much lighter orange peel texture and then prime and paint. The square footage of these rooms was just too much for us to do on our own. And because the texture in the sitting room and dining room would no longer match the rest of the rooms, we also had them apply matching texture over what we had already done ourselves.

The process was a bit labor intensive, we had to move out of our house from Monday to Friday (originally it was supposed to be Thursday, but the primer didn’t dry in time due to humidity). Our pets had to move too, so Molly (our dog) stayed with us in a short term rental and the cats all went to a place that has a special cat boarding room. I think they hated it. The worst part was moving the majority of our furniture from the downstairs rooms into the garage so that the house would be ready for the contractors. We’re still working on unpacking…

Our new ceilings are SOOOO much better than the old popcorn texture. There are a few places that are less than perfect, but they aren’t really noticeable unless I show you, and I suppose the only way to have perfect ceilings is to have that texture applied to a brand new house.

The part that I was most unhappy with throughout this process was the clean up. I was under the impression that the house would be decently clean when they were done, but we had to clean the floors multiple times, wipe down doors, clean windows and we continue to find splatter on surfaces. When they came back on Saturday to finish some touch up, we had already cleaned on Friday and then they left a mess again… sigh. I know that’s the way these projects work sometimes but I hadn’t factored that into my plans.

On Sunday, while the furniture was still in the garage, we decided to paint the entryway and living rooms. It wasn’t something we planned to do immediately, but since we had the supplies, we decided to go for it. I’m glad we did, because it covers up the overspray from the ceiling paint, at least in those two rooms.

We also decided to remove the kitchen light fixture from our drop ceiling so they could texture the inside of the light cavity, and then we installed a new track light we picked up at Lowe’s. It’s so much nicer! Eventually, I’d like to renovate the whole kitchen and knock out the drop ceiling, but this will hold us over. 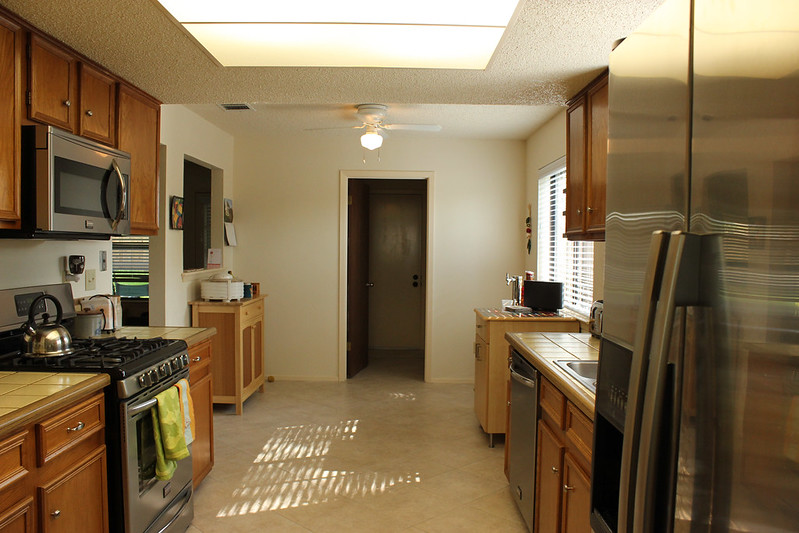 Looking towards the entryway, you can see the painted walls and new ceiling texture

Looking into the living room

Our next house project is hopefully to get new wood floors where we have carpet downstairs and get all of those ugly, peeling baseboards replaced with nice white trim like in the front two rooms! I. can’t. wait.!