On Friday we went on a guided bike tour. We were the only people on the tour since it’s slow season. Our guide was enjoyable to chat with and showed us some great sites. We started in Simpson Bay and crossed over the large bridge, pausing at another border monument. 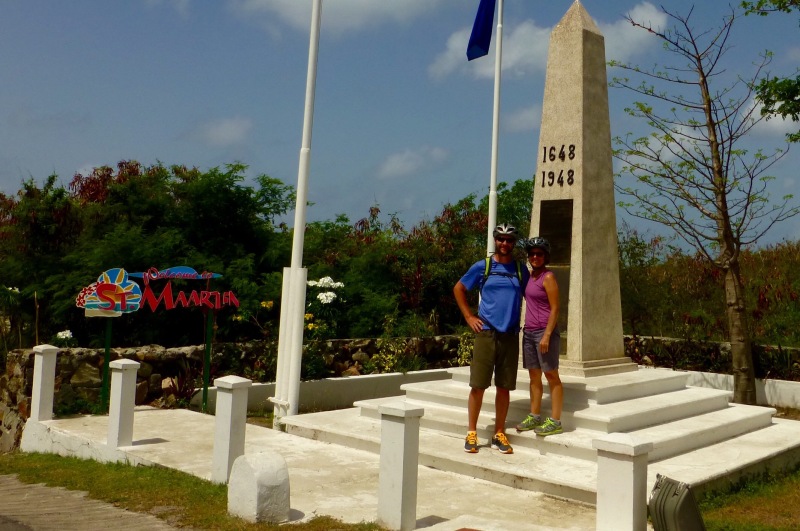 From there we headed to Marigot and rode down along the bay. Apparently this ship was grounded in 1995 when hurricane Isaac hit the island.

We continued west from Marigot on the small spit of land that goes by Baie Nettle. We paused to fill up on water.

Our guide the took us off the beaten path to explore an abandoned resort. 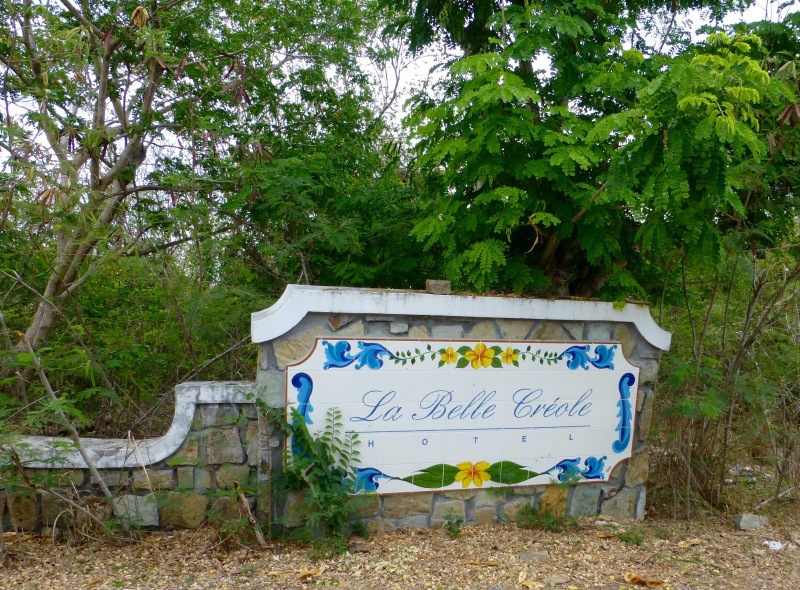 Obviously we weren’t supposed to be there, but plenty of people had been there before us. The fancy bar: 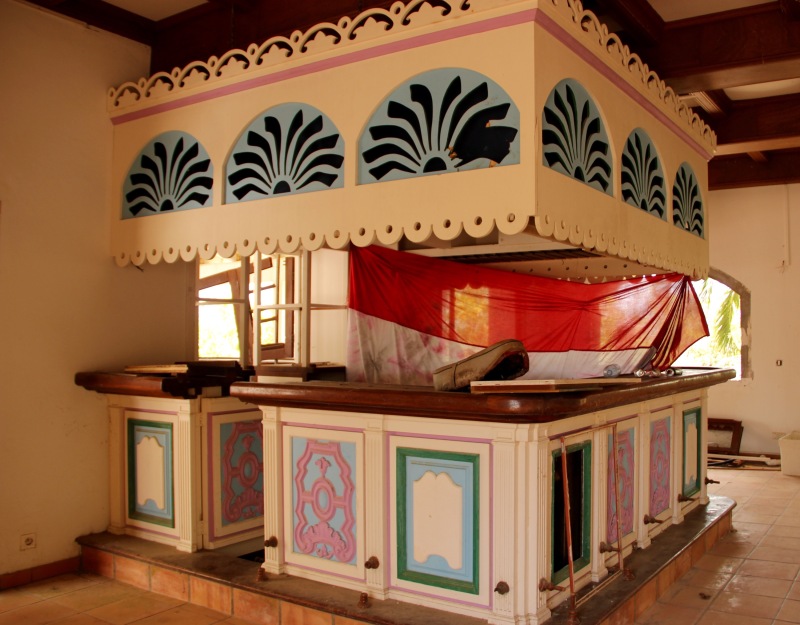 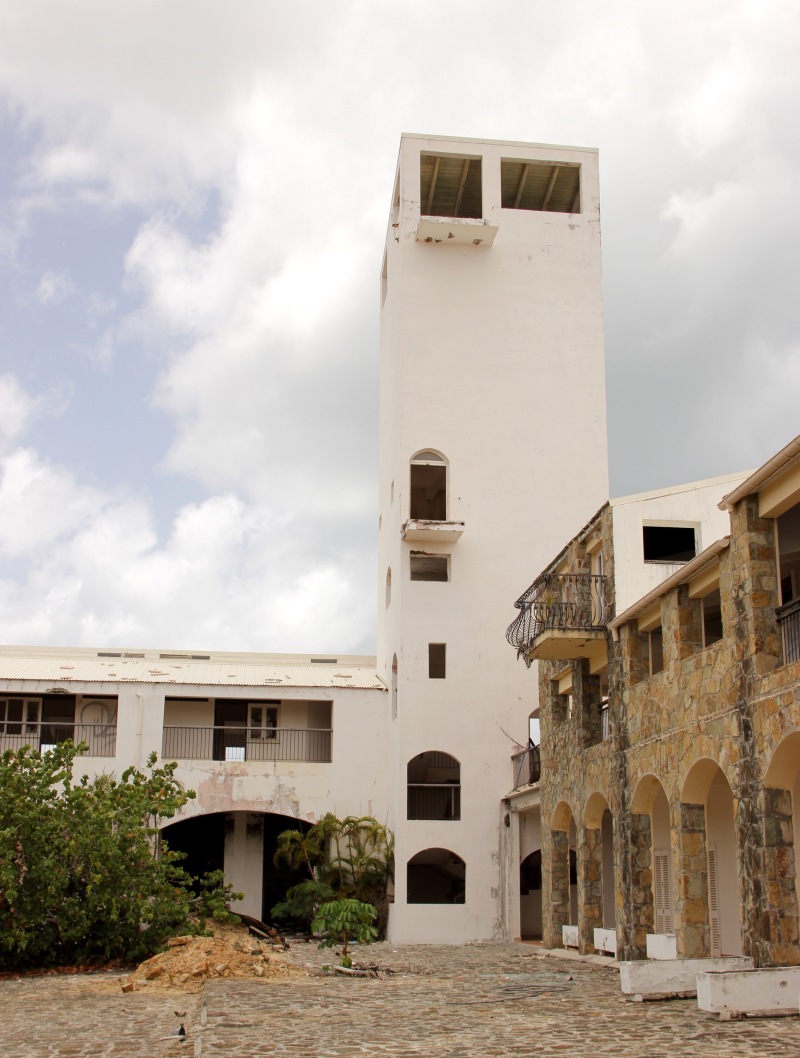 The view of the ocean behind some of the rooms. 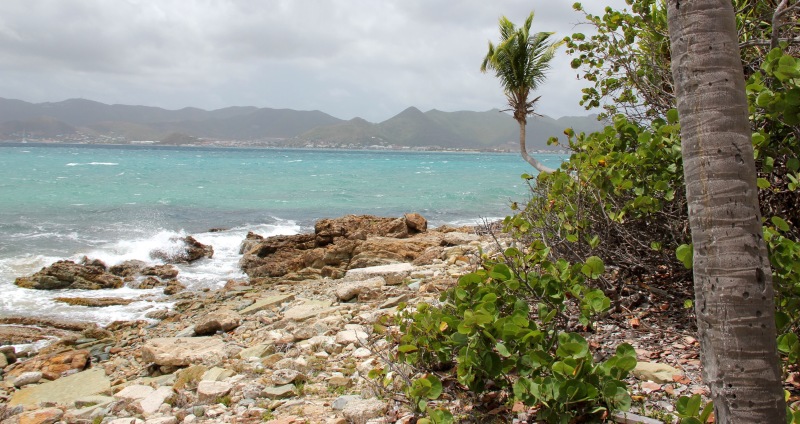 We continued around Simpson Bay Lagoon over near the airport. We took a break by the airport at Maho beach, the famous beach where giant planes come in so close you can almost touch them, or so I’m told, since I haven’t seen it happen  yet.

We took in the view at Sunset Bar and Grill and enjoyed the beach view. Around that time we noticed that traffic around the airport was stalled. We quickly learned that there was a bomb threat at the airport, closing down the only road back to where we started.

Our guide proposed a different route that involved pushing our bikes along Simpson Beach for a few hundred yards, past the airport runways. It was the hardest part of our ride, the bikes were super heavy in the sand and there was a very strong headwind working against us. 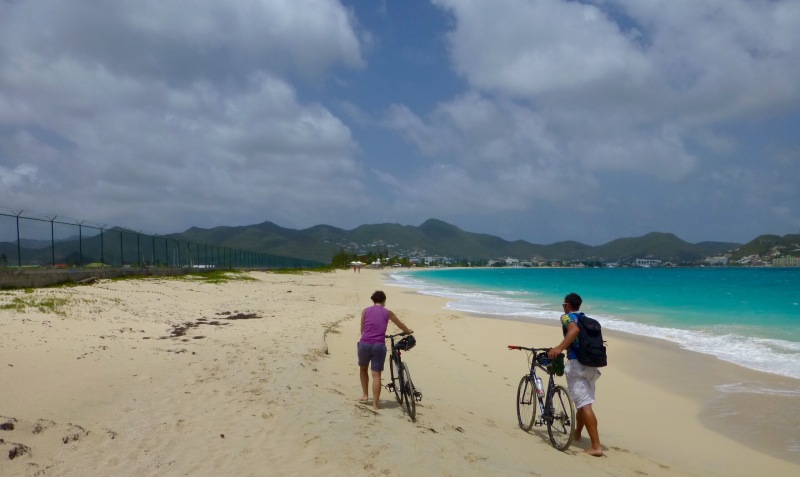 But at least the view was good.

We eventually made it back to our car. After a delicious and healthy lunch at Top Carrot in Simpson Bay we headed away from the airport to avoid the traffic jam and stopped at Le Galion, a kid friendly beach (obvious from the number of children in the photos). It was supposed to have snorkeling but we didn’t find it. Behind the beach club was some sort of abandoned building, something you see quite often on the island.

That night we headed to dinner at the “most romantic” restaurant on Saint Martin, Sol e Luna. It has a restaurant and guesthouse on a road off of the route to Cul de Sac. The restaurant itself definitely had a lovely ambience. 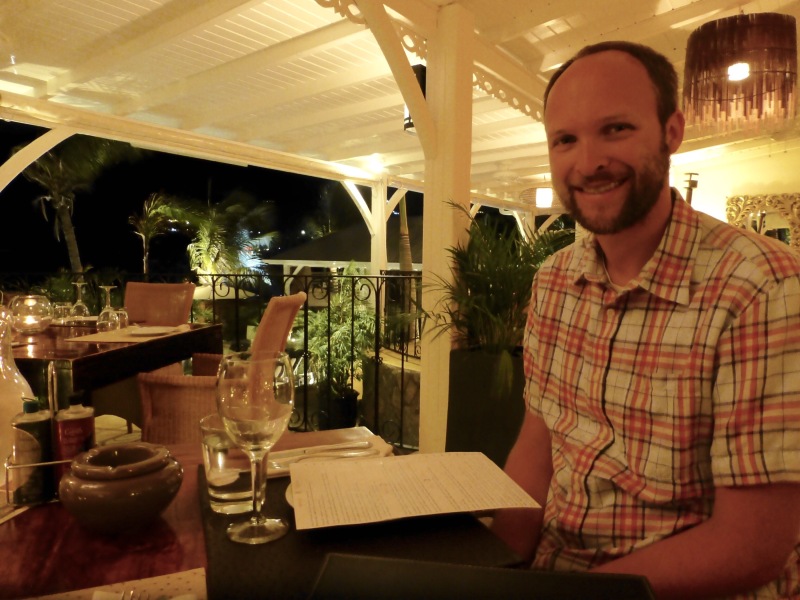 And our meal started off right with a delicious champagne mojito.

The amuse bouche was a chilled asparagus soup with creme fraiche and the bread was lovely.

Our starter salads were simple but good. 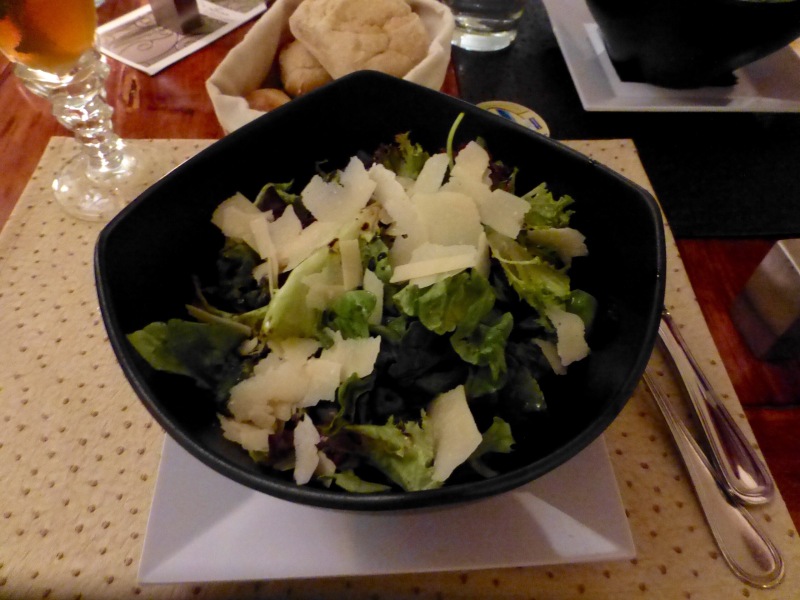 My entree was surprisingly disappointing. It looked lovely, but the fish wasn’t good and the veggies weren’t anything special. 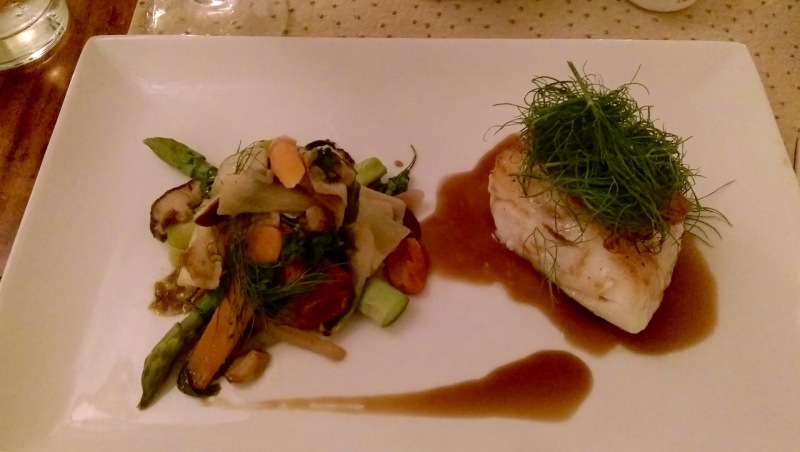 Carl’s steak had a tasty mushroom topping, but the same veggies and a bit of potatoes.

The dessert was amazing, strawberries with fresh whipped cream and layers of pastry. 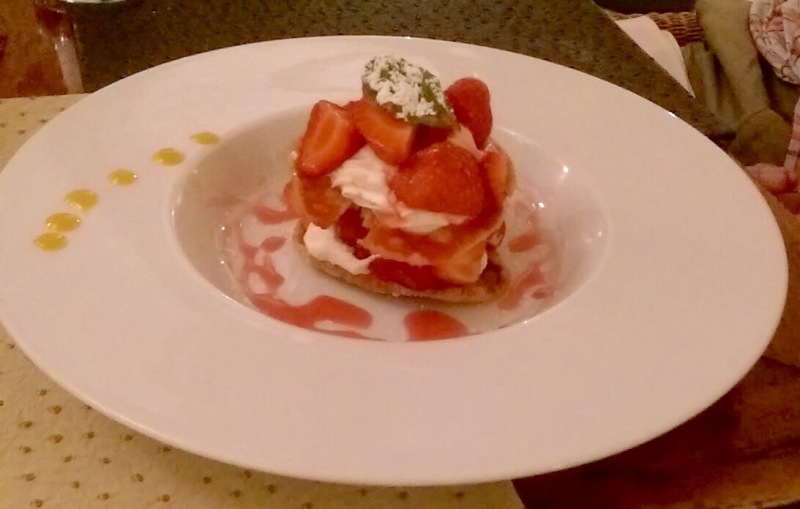 Unfortunately like many of the expensive restaurants here, the food didn’t match the price. We could have had super amazing dinners at some of our favorite Austin restaurants for the same or less money.

On Thursday we headed to Ilet Pinel, a tiny uninhabited island off of the northeast coast of Saint Martin, not too far from where we are staying. You just go up the road to Cul De Sac and catch the ferry. We never saw a ferry schedule and just assumed it started early. Wrong. In the off season it starts at 10 am. Luckily we got there at 9:30 and didn’t wait too long. It’s only a 5 minute ferry ride and you can even kayak over if you’re so inclined. I wanted to take my DSLR, so the ferry was our best option. When we arrived, the beach was pristine and we had our pick of chairs at Karibuni beach club.

We set our stuff down and headed for the hiking paths that would take us to all sides of the little island. First we went by the iguana colony. See grandma iguana surrounded by the younglings, even a tiny one to the right of grandma and behind the two juveniles. There were more… So many!

We hiked over the hill to the Atlantic side beach, which was quite rough.

Young me would have freaked out here because of the huge amount of broken up coral and shells. Big pieces! Someone constructed an artfully arranged pile on the beach. I still feel the pull to collect my favorite pieces, but it’s not allowed in a nature reserve like Ilet Pinel. 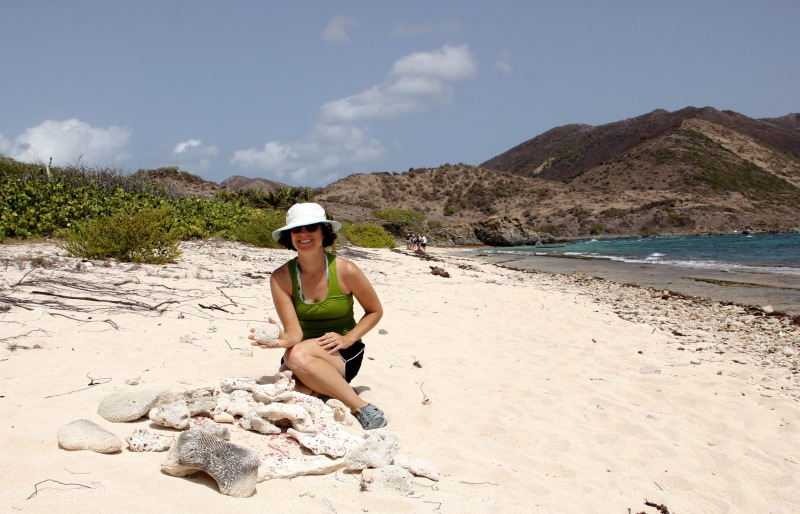 We followed the trails to each of the signs and had some great views of Pinel, Saint Martin and the surrounding islands. In this photo you see one of Pinel’s Atlantic side beaches, the thin channel separating it from Saint Martin, and then Saint Martin.

A little peninsula jutting out from Pinel and Orient Bay of Saint Martin.

Pinel had the most lovely beach on the side towards Saint Martin.

After our hike we snorkeled where there used to be an official snorkel trail, but is now abandoned.

We had lunch on the beach at Karibuni beach club. Cod fish fritters, pork spring rolls, and a delicious fresh salad. Later I enjoyed a wonderful frozen mojito. 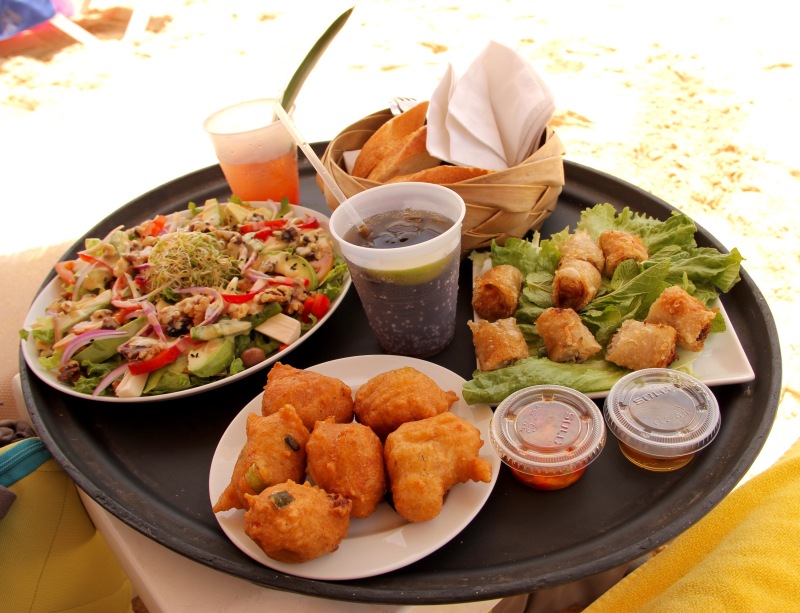 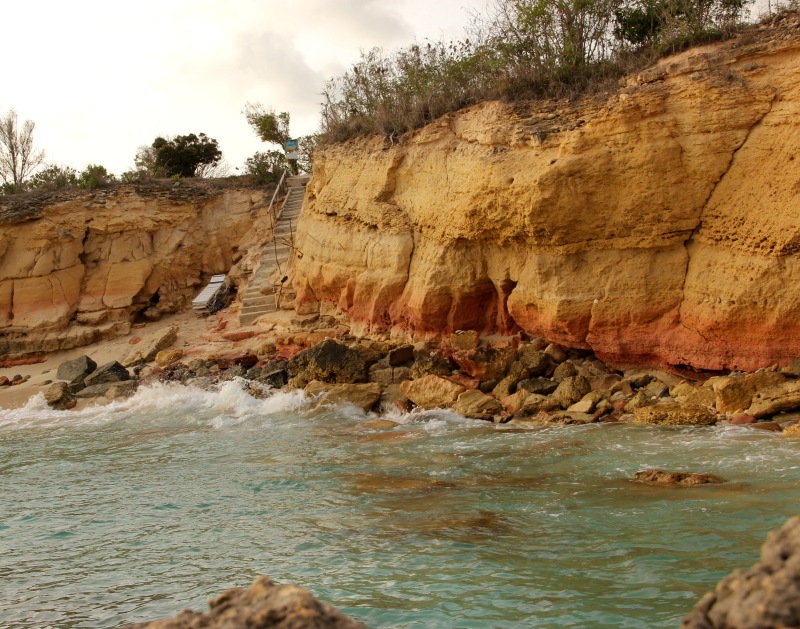 We enjoyed some wonderful strawberry infused sparkling wine picked up at Bacchus.

We were able to see the sun near the horizon, but then it was obscured by clouds. Unfortunately the sky did not light up in wonderful colors.